by Pedro Tran
in Bathroom
0

There were tons of Toto toilets to choose from, literally several hundreds and a good majority of them had phenomenal reviews as well so sorting through them trying to fing the best Toto toilets was quite a challenge that took many hours of work.

​I tried to list some of the top models by their design/rating/capabilities, etc to get a better overall article but I think I am going to have to do a few more to cover them better (in the future). Here are some of the top Toto toilets I came up with: 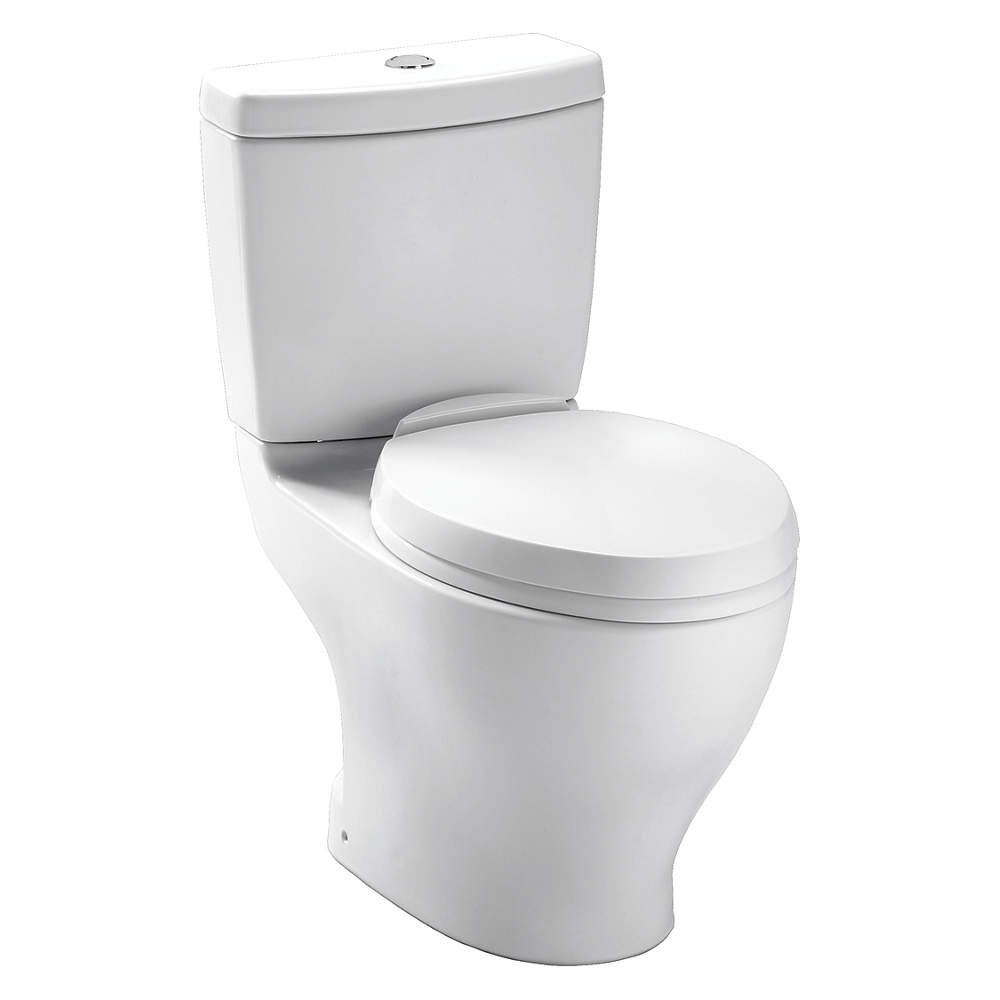 The CST412MF.10 No.01 Aquia Dual Flush​​​​​ from TOTO is what a modern standard toilet should look like.

Its simple and clean design rivals some of the popular one-piece models out there, with an elongated skirt that makes it easy to clean from top to bottom.

A slim, closely-coupled tank sits back from an elongated bowl that can accommodate the tallest of users. Set at a universal height, this Acquia is easily sat on even by folks with trouble bending down. You will have to select your own toilet seat for this one, but this model is easily compatible with a wide range of TOTO seats.

The low-consumption flush system gets rid of most debris with just 1.6 gallons a flush. Solid masses are easily disposed of with the heavy flush of its Dual-Flush chrome push-button set at the top of the tank, while liquid wastes are quickly taken care of with the light flush option.

2. How About The Best Value Toto Toilet? 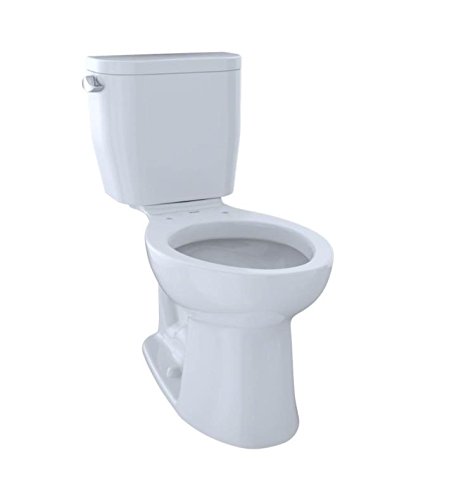 The CST244EF#01 Entrada from TOTO is your dependable toilet fixture, sitting at a standard height from the floor as a two-piece assembly with a tank and elongated bowl.

Taller users need not strain themselves using the Entrada, as a generous sitting height and an elongated design makes things easy for them.​

Under the standard looks, however, is an advanced flushing system that can deliver powerful flushes with just 1.28 gallons per press of the side-mounted chrome lever. TOTO’s trademark E-Max system makes this possible, effectively flushing down solid masses without the noise of pressure-assisted commodes.

An oversized 3-inch flush valve dumps the water in one powerful rush, while a wide 2-⅛-inch tramway is glazed slick to assist passage of solid waste. A simple but effective pilot valve ensures quiet operation, whether flushing or refilling. You’ll have to get your own toilet seat though, and TOTO recommends the SS114#01 soft close seat to complete the package. 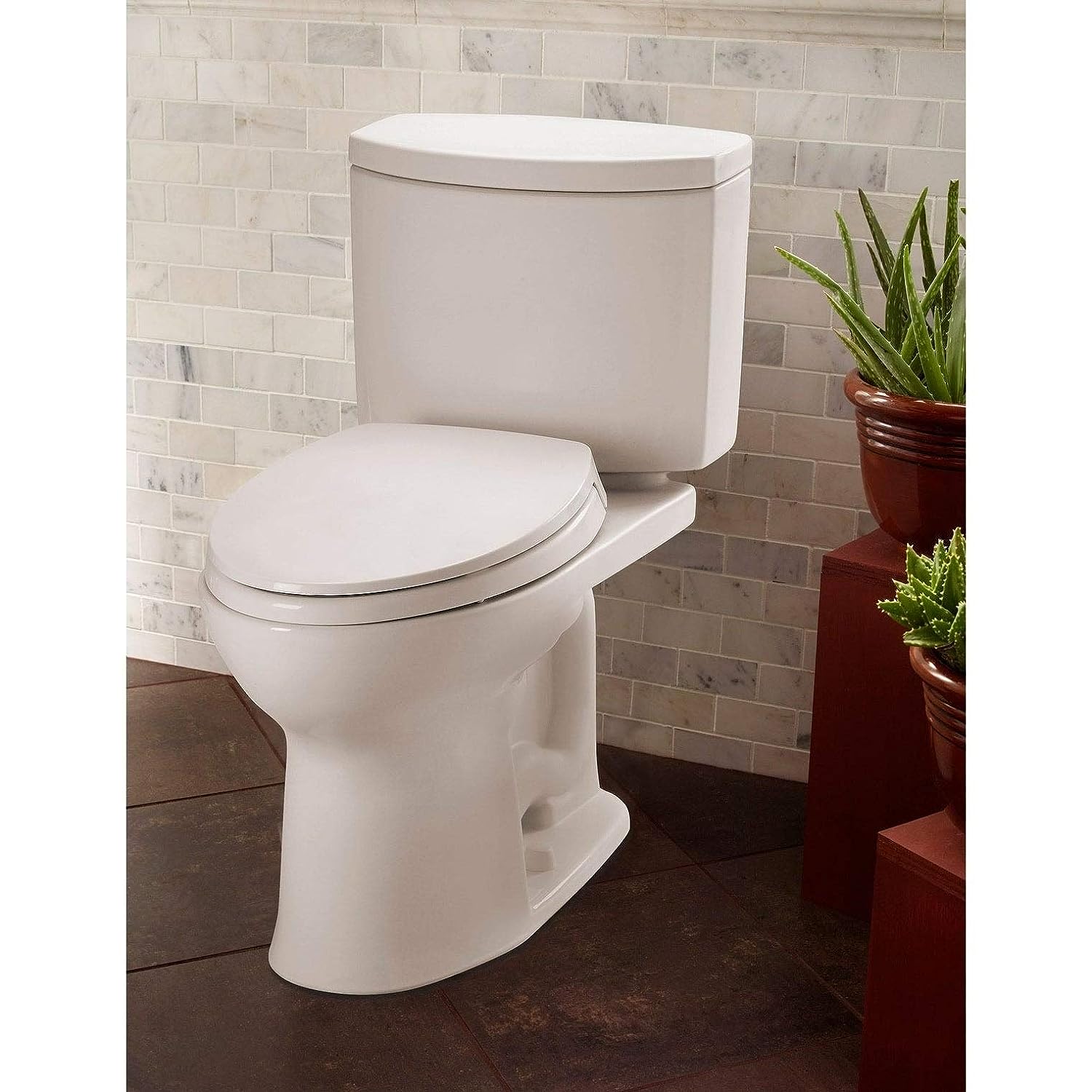 The CST454CEFG#01 Drake II from TOTO is an advanced two-piece toilet that ensures powerful, quiet flushes every time, even with heavy use.

It’s a sturdy, modern-looking kit with a slim tank fitted on top of an extra-elongated bowl, with plenty of room to spare at the back.

Under this unassuming exterior is TOTO’s Double Cyclone flushing technology, that flushes away solid masses in just one press of its side-mounted chrome lever. It saves 20 percent more water than other 1.6 gallons-per-flush toilets, which are already considered “low consumption.” It does this with a computer-designed oversized trap way that sucks away solid debris with every flush.

The beautiful glossy finish of the Drake II is further enhanced by TOTO’s patented SanaGloss surface treatment. This ultra-smooth glaze creates an ion barrier that keeps off bacteria, molds and mildew with every flush. Just be careful not to use abrasive products during cleaning, and this sanitary finish will last you for years.

4. ​​One Of The Best Flushing Toto Toilets 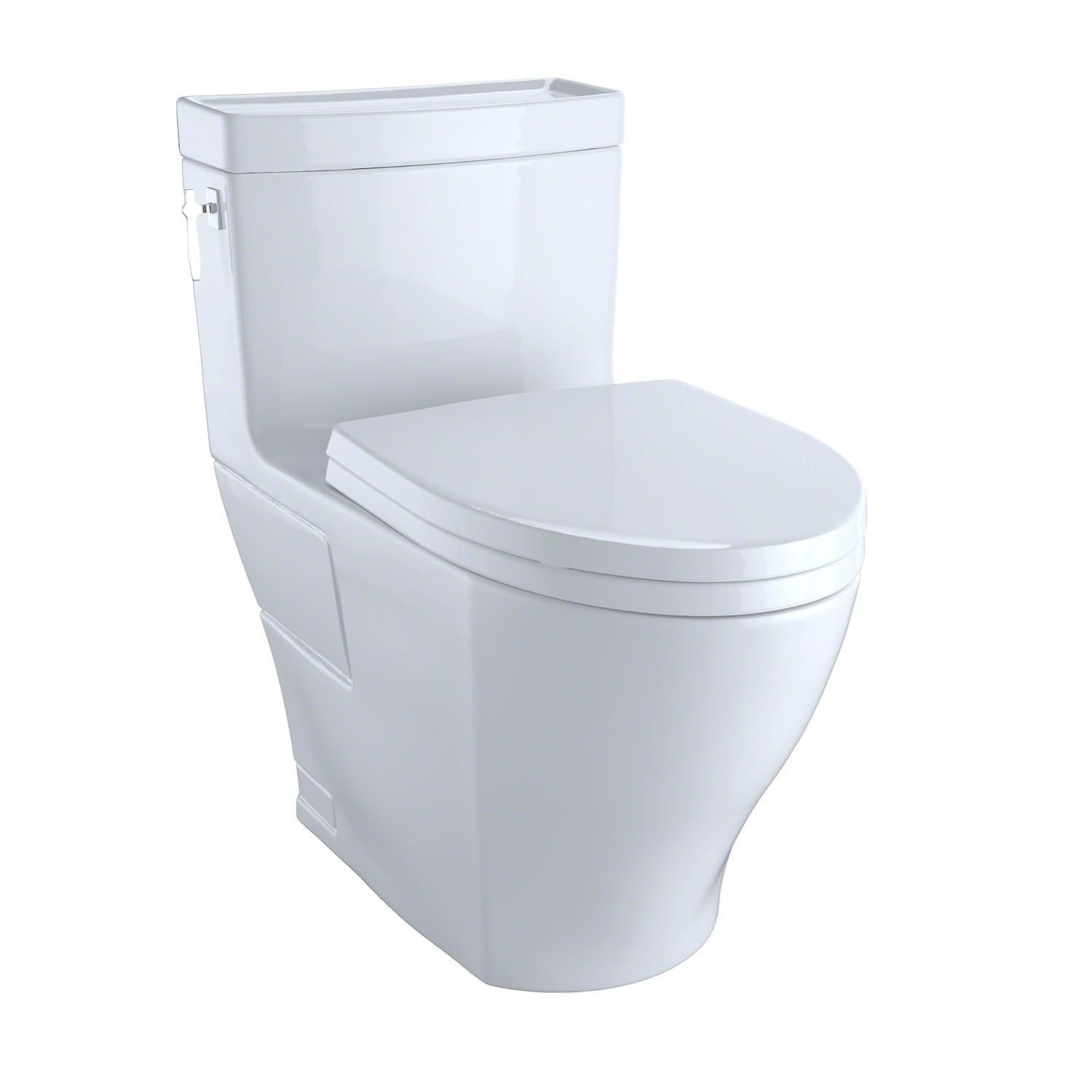 The MS626214CEFG#01 Aimes from TOTO is a compact, modern commode that will go well with any modern-styled bathroom.

The single-piece construction lends itself to quick and easy installs, while the integrated tank and bowl makes clean-up really easy.

Not that there’s much cleaning to do, anyway – TOTO’s patented SanaGloss surface finish sees to it that mold and mildew are kept away from this toilet, inside and out.

Like other TOTO premium commodes, the Aimes is a very low consumption toilet that clears away solid waste with just 1.28 gallons in every flush. That’s already 20 percent less water used than other “low consumption” toilets that use 1.6 gallons.

This kit already comes with its own SS214 SoftClose seat, and you have a choice between chrome plated, brushed nickel or polished nickel finishes for the side-mounted trip lever. This toilet is CalGreen compliant, ensuring an environment-friendly flush with every use. 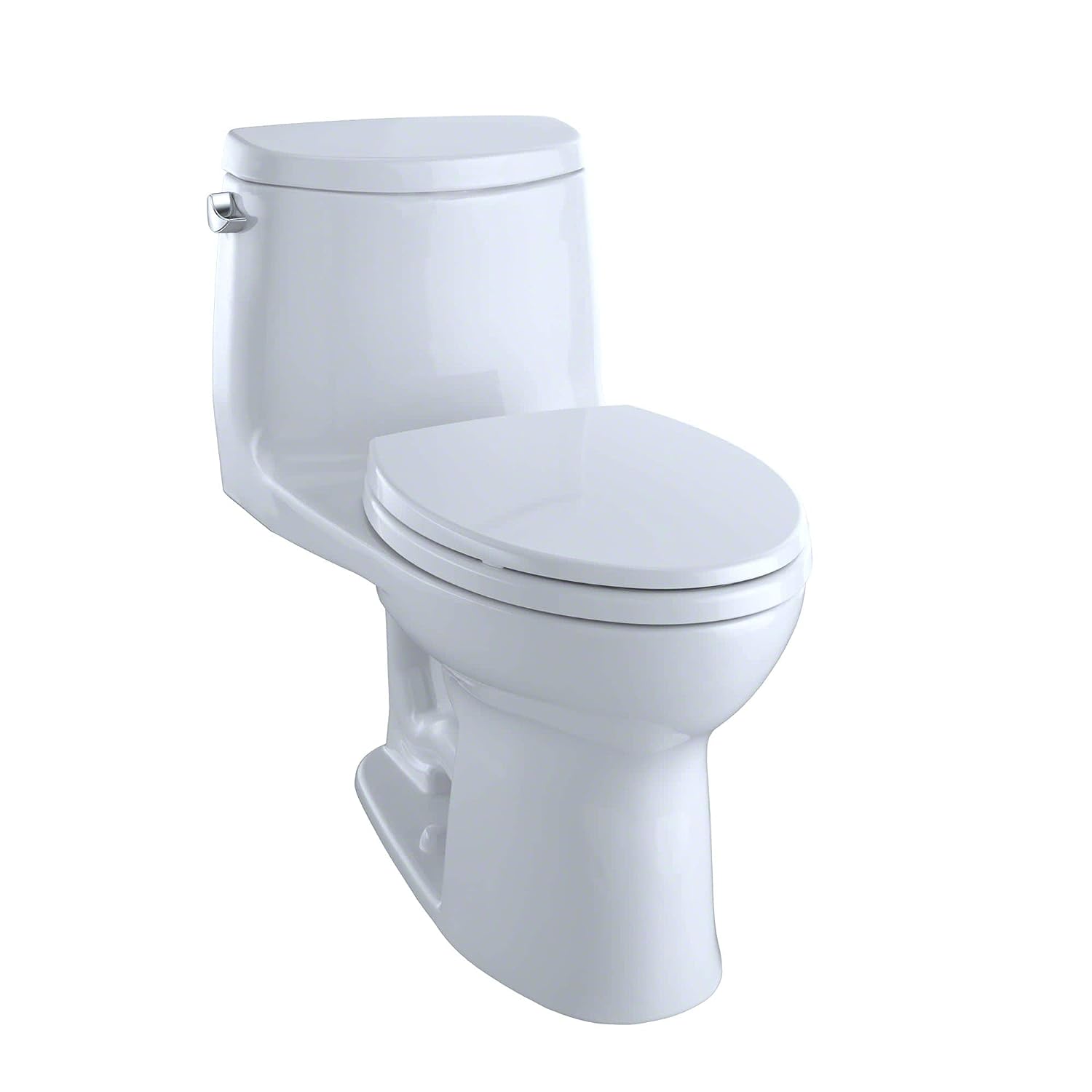 The MS604114CEFG#01 Ultramax II Het Double Cyclone from TOTO is another single-piece unit that makes use of some of the toilet-maker’s most advanced features.

Starting with flushing efficiency, the Ultramax II uses a paltry 1.28 gallons per flush, compared to other toilets that dump in 1.6 gallons.

The overall design features an oversized tank base integrated into an elongated bowl. The whole assembly sits at a generous Universal height that’s comfortable for most users, even the taller ones. The lack of seams makes this toilet really simple to clean, too.

Between washes, the SanaGloss finish of the Ultramax II puts up an ion barrier that keeps out bacteria, mildew and molds with every flush. Less cleaning equals less chemicals used, making this toilet friendlier to the environment and to your wallet as well.

Each flush easily clears away solid waste,thanks to TOTO’s Double Cyclone flushing technology that ensures strong but quiet flushes every time. Two nozzles swirl the jets of water around the rim for a thorough cleaning action, while the rim itself is a hole-less design that won’t trap dirt or moisture. Seat included with an order.